The Courthouse Winds were up for Northern Exposure, the 2015 Woodmont Par Three Tournament, contested today by 100 men and women over a 2041 Yard Par 54 track designed by D & D & W Associates.  33 Keepers were part of the kompetion which was played as a Step-Back Scramble for both Gross and Net Prizes.

The Keepers team of Rusty “Joe D” Minkoff, Alan “The Hanging Judge” Levine, and Jim “Boom Boom” Polsky torched the field with both the low gross and low net scores for the day with 46 and 40.9 respectively.  As you can imagine they were hitting it close and making the putts with 8 birdies over the 18 holes.  In the post game interview Joe D said they were never close to making a bogie getting top performances throughout their line up.  As you can see, our flag was well represented as three other teams with Keepers finished in the money. 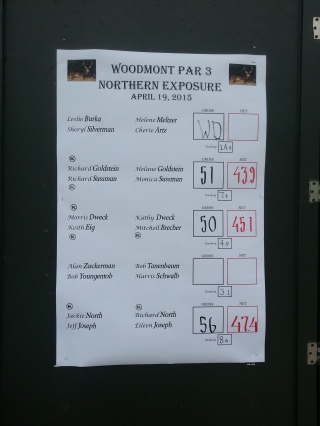 Hello
I recently came across your website and noticed you are using my photo of my two bucks fighting (http://www.keepersgolf.com/2015/04/) Sorry but this is copyright infringement and you do not have my permission to use my photo and on the advice of my lawyer I am directing you to either remove any and all photos which contain my property in part or in whole immediately or compensate me for the use of my photo.

Thank you for your attention to this matter

I apologize for this. It has been removed from our site.