After five months of kompelling kompetition the Keepers Match Play came down to three hardy bracket survivors playing the Battle Royale for the Match Play Championship.  As it should be, the quality of play and competitive banter was befitting of a Keepers Major Championship.

The Battle Royale Final was played on the North Course on a glorious day as an Almost Skins 5-3-1 Match Format where the best net score on a hole earns the player 5 points, second best net score 3 points, and not so best net score 1 point.  Total points for the 18 holes is the Match Play Champion for 2017.  Bountiful Kash Sweeps, slick trophy plaques, and a bunch of Keepers Kup Points were on the line today.   Oh, did I mention Bragging Rights?

From the first hole on it was obvious that it would take very special play and maintained focus to win this day.  Coach Fisher saw what he was up against when he parred the first from the other first’s fairway only to see both Terp Station and the Press Man make par/net birdie to grab the early lead.  Undaunted Fisher made the first of his two natural birdies on the front with a 15-footer on the second to square up the match at 6 points each through two.  After all net birdies on three Kevin started to get his hands around the wheel with two net birdies on four and seven managing to build a three point lead (29-26-26) at the turn.

The Par 5 tenth was indicative of the kompetitive quality of the day’s golf as Fish and Terp Al made net birdies to knot the score at 30 points each heading for the eleventh tee.  Schwartz and Bass traded blows on the next two with net birdies respectively before Kevin somehow edged ahead over the next three to carry a 3 point lead to the 16th tee with the score Bass 48  Schwartz 45  Fisher 42. 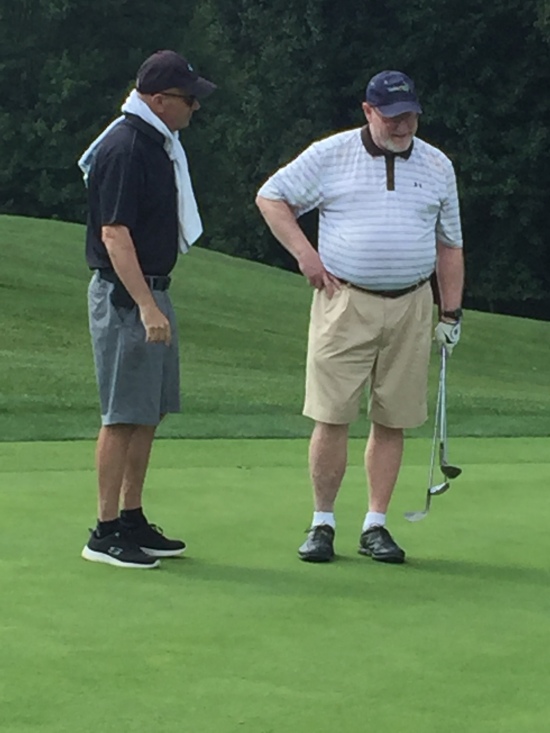 Kojak as Bagger Vance….why is his player holding all the clubs….a work in progress…

The seminal play of the day came on the Par 3 16th.  With two opponent balls on the green in regulation Terp Station hit a peeler into the right greenside bunker-things were looking grim even though he was getting a stroke on the hole.  Kevin had 60 plus feet from the front edge to the back left pin and left it double digits short on the way to a bogie.  After a splendid iron shot off the tee, the Coach had it 15 feet under the hole on the right level but the uphill birdie putt wandered slightly at the end and he settled for par.  The Terpster hit the Sportcenter shot of the day…….Da Da Da…Da Da Da…….sticking his 60-foot bunker shot to kick-in range for a par/net birdie to grab the lead once again.

After a seventeenth hole that none of the kontestants would like to recall, the trio stepped on the final tee box with it all on the line-Schwartz 52-Bass 51-Fisher 50.  Any one of them could win which is kind of how it should be.

Kevin managed to find the left edge of the green from the heavy rough on the right so the gauntlet was dropped.  Terp Station sewed an amazing recovery hybrid from the dead grass on the tenth hole through a small opening in the trees to the foot of the upslope between the bunkers keeping hope alive.  Coach Fisher’s hopes were dashed by a tree limb on this second from the left trees leaving him no way to make better than bogie on a hole when both of the others got a shot.

It came down to putting as Kevin had another kross kountry putt with a six-foot break for a two-putt and the win.  The first one pulled up on the hand brake and stayed 12 feet above the hole and his fine second effort once again slipped by the edge leaving him a tap-in bogie/net par.  But would that be enough?

After lofting his third across the front bunker to the edge of the fringe below the hole, Alan had 25 feet left to traverse in 2 shots to claim the big enchilada.   Terp Station showed the same stoic resolve he had displayed all day stroking the first one to 3 feet 11 inches and, after a pep talk from counsel, buried what was left in the back of the hole for the net par that would hold his one point advantage and claim the Match Play Championship.

Kongratulations to all three guys….it was a match well played and a deserving champion emerged.  Special thanks to Brandon Caiola for his effort in administering this final.

The final takeaways from this year’s Keepers Match Play were: