The Final Fore of the Keepers Alternate Shot Series was once again a smokey affair which pitted four two-man teams, well stocked with expensive cigars, against each other in a round-robin series of three 9-hole Alternate Shot Matches on the South Course to determine our Keepers Kahootz Champions for 2019.

The kompetitve instincts of the four teams making it into the Final Fore would make for a full afternoon grind to determine the champions.  Marc “I have finally settled on a putter” Birnbaum and Howard “I want this kool trophy” Wollner dominated their kompetition in the three week night matches leading going to the Finale with 25 points.  Yale “Ivy League” Kaplan and Michael “They love the sexy accent” Levy had 22.5 points to tie for second through the evening matches with the dogged pair of Harry “Stogie II” Harrison and Paul “Pablo” Cohen.  Rounding out the Final Fore were Steve “What are we playing for?” Keller and John “Freaky” Friedson with 22 points.

After the first matches on the back of the South Harrison-Cohen took the early lead winning four holes in a row from 13 through 16 to notch a 5.5 to 3.5 win over Kaplan and Levy.   The Birnbaum-Wollner vs Keller-Friedson opening match was a total Karch Kiraly affair with them trading holes from start-to-finish before prevailing 5 to 4.  There was little momentum for any team going into the second stage of matches.

Turning to the front nine for the second matches Harrison-Cohen ceded the advantage on the first five holes to Birnie and Wolles but proved tough from six through nine scratching out a 4.5 to 4.5 split.  Keller-Friedson started slowly as well, losing the first two, but found their keel on holes three through eight squeezing out a 5 to 4 win over Yale and Michael.

With 9 holes left it was anybody’s ball game……..

The final matches returned to the back nine and two closely played matches left the final winner in doubt until the last putt dropped.

Birnbaum-Wollner fought hard against Kaplan-Levy with the match tied through the first seven holes.  Fate turned in their favor with a win on the 17th and a half on the final hole that earned them a narrow 5 to 4 match win and the clubhouse lead at 14 1/2 points.

But would it hold up?

Keller-Friedson had ground to make up on the leaders and started out strong winning three of the first four holes to stake a decisive lead and buoy their hopes of taking home the hardware.  Harrison-Cohen clung tightly to the wreckage avoiding lost holes from 14 through 17.  But by the 18th tee, with the match score at 5 to 3 against them, the realization was at hand that Harrison-Cohen could not win enough points to catch the leaders but they could still be a spoiler in determining the champion.  With Keller-Friedson in for bogie on 18,  Pablo stoked a par putt that took an eternity and every dimple available on the ball before it tumbled into the cup to win the hole.  The 5 to 4 winning result of this match left Doc and Freaky a mere 1/2 a point from a playoff for the title with Birnie and Wolles.

As predicted this turned out to be a three-plus cigar affair and the champions were determined by the narrowest of margins.  Hearty congratulations to the Keepers Kahootz Champions. 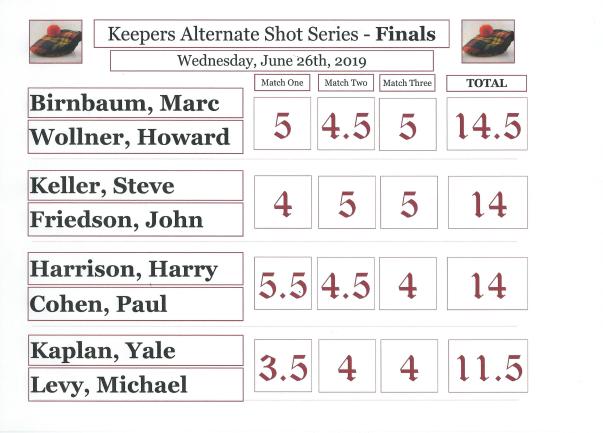 Special thanks to Konnor and staff for their adept administration of the Keepers Alternate Shot Series and these Final Fore Matches.

Great narrative! Well done. I anxiously read through it hoping , against all hope, for a different outcome. But alas, Pablo’s ball still took that slow final revolution into the hole.

Sent from my iPhone