The kulinary skills of our guys are called into play during our almost annual Two-Man Ham n’ Egg kompetition.  Each guy’s score counts on every other hole unless they break a yoke and decide to use one of their flips to salvage the entree.  Only two flips in 18 holes before the entire round turns into an experimental omelette.

Rick “Kojak” Greenberg and Alan “Terp Nation” Schwartz sliced and diced their way through the field with a net 66 to win 300 Kup Points and $100 in Kash Sweeps each.  Two chef pairs tied second at 69- Gary “We knew you were out there” Faigen with Paul “Whos Got His Grove” Cohen and Art “Krieg” Blitz with Howard Isaacson for 175 Kup Points and $40 Kash Sweeps a man.  Craig Goodman and Rich Sussman were 4th at 71 and Kaptin Keith Eig and Gary Abrahams were 5th at 72 net. 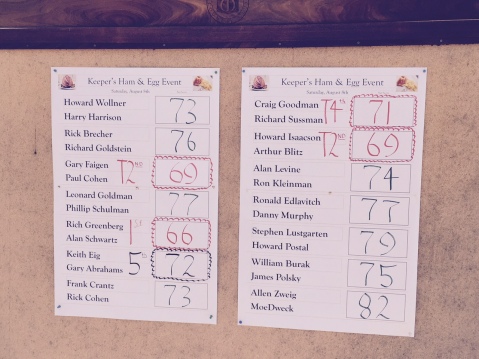 In the Pools of Honor/SGMA-Wounded Warriors individual kash play the Krieg put an all out land and ground assault on the zoysia with a stunning net 68 on his own ball to grab the top prize.  Kojak parlayed a 72 for second with Gary Faigen one back at 73 for third.  Through this kash kompetition we raised another $250 for our Players Pool donations at year’s end.