In the face of threatening weather, over 40 Keepers showed up to stage our annual Keepers Pro Schmo with a little help from 8 of their virtual friends.  Playing the “New North” the Keepers got to experience the changes to the front nine green complexes that have been under wraps all winter. 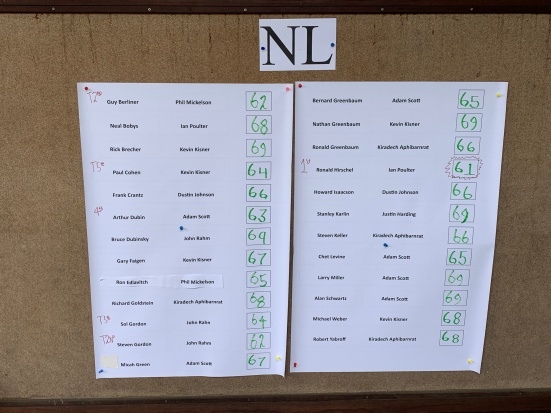 In the American League it was Mike “Not Lew” Selis who carried Kevin Kisner on his back on their way to a shooting Net 62 to win their division.    A bit of a traffic jam developed in second place with Net 63 involving Steve “Peleton” Lustig/Kiradech Aphibarnrat, Len “The Plumber” Goldman/Justin Harding, and Bobby “Jack Lalanne” Fogel/Kiradech Aphibarnrat.  Fortunately no air bags were deployed.

(Click to see the full field Pro-Schmo Results and Prizes)

The Net Pars or Better Kash Game raised the first $350 toward The Keepers year-end military charity donations and paid out some walk around Kash Money to six Keepers who led this kompetition.

The season ramps up quickly as we move into May with a Four-Club, Kolor War, and the first two of the Alt-Shot Series matches coming your way.  Stay tuned for the announcements and sign ups over the next few weeks.  Thanks to all who participated in kicking off our 12th Keepers Season.